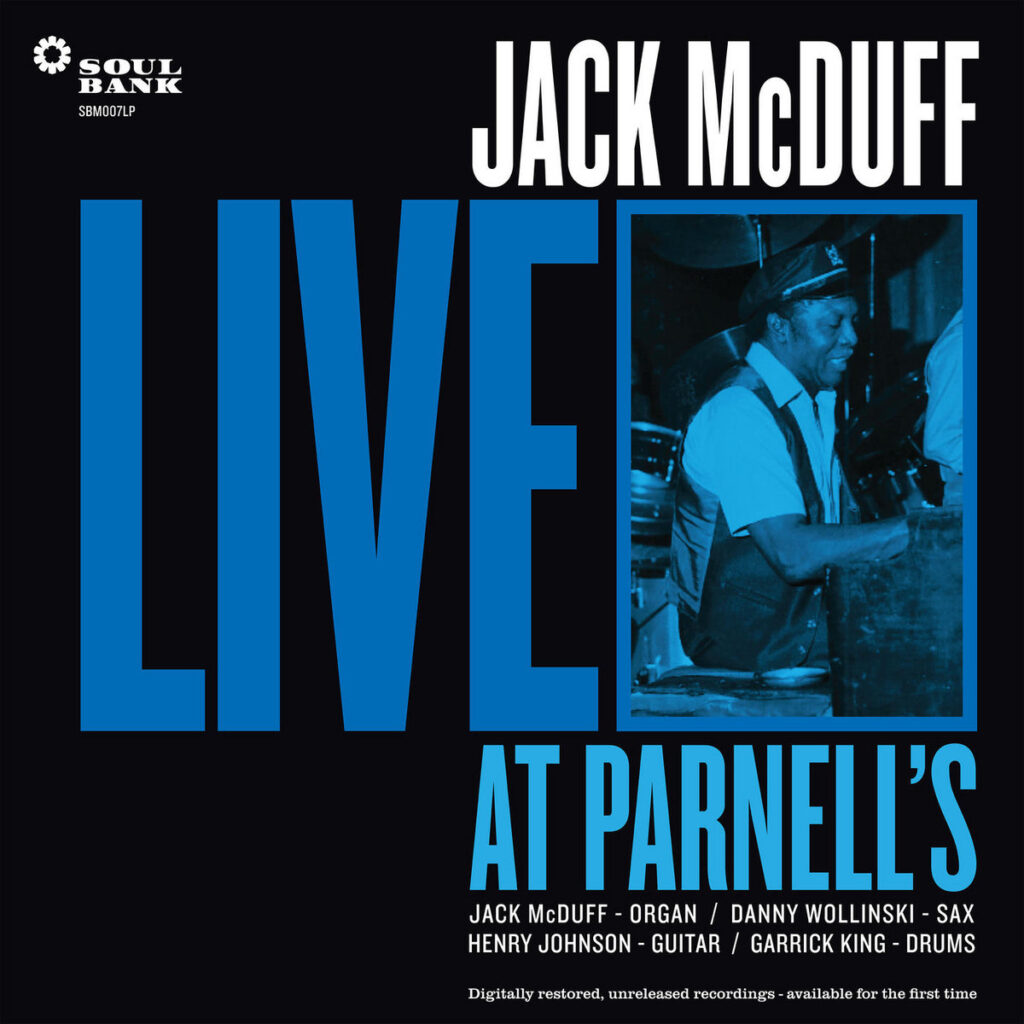 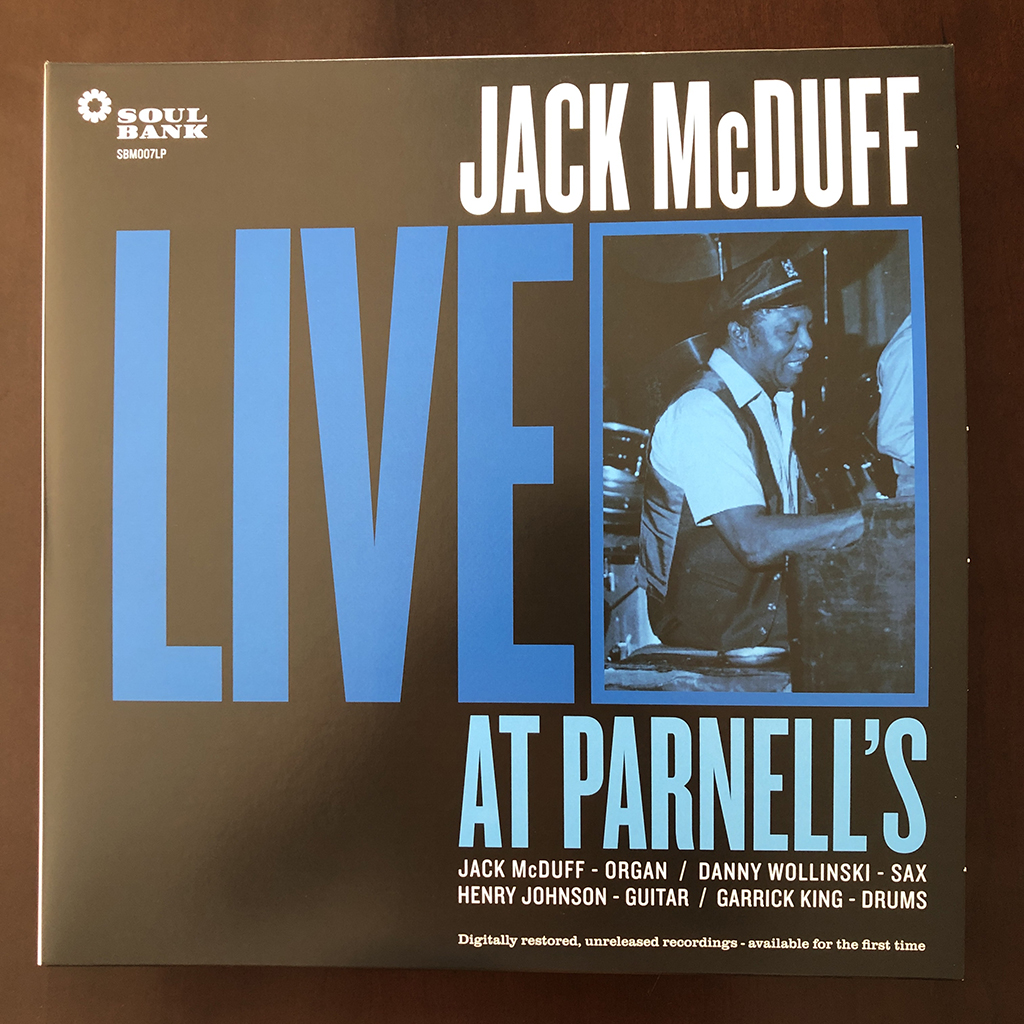 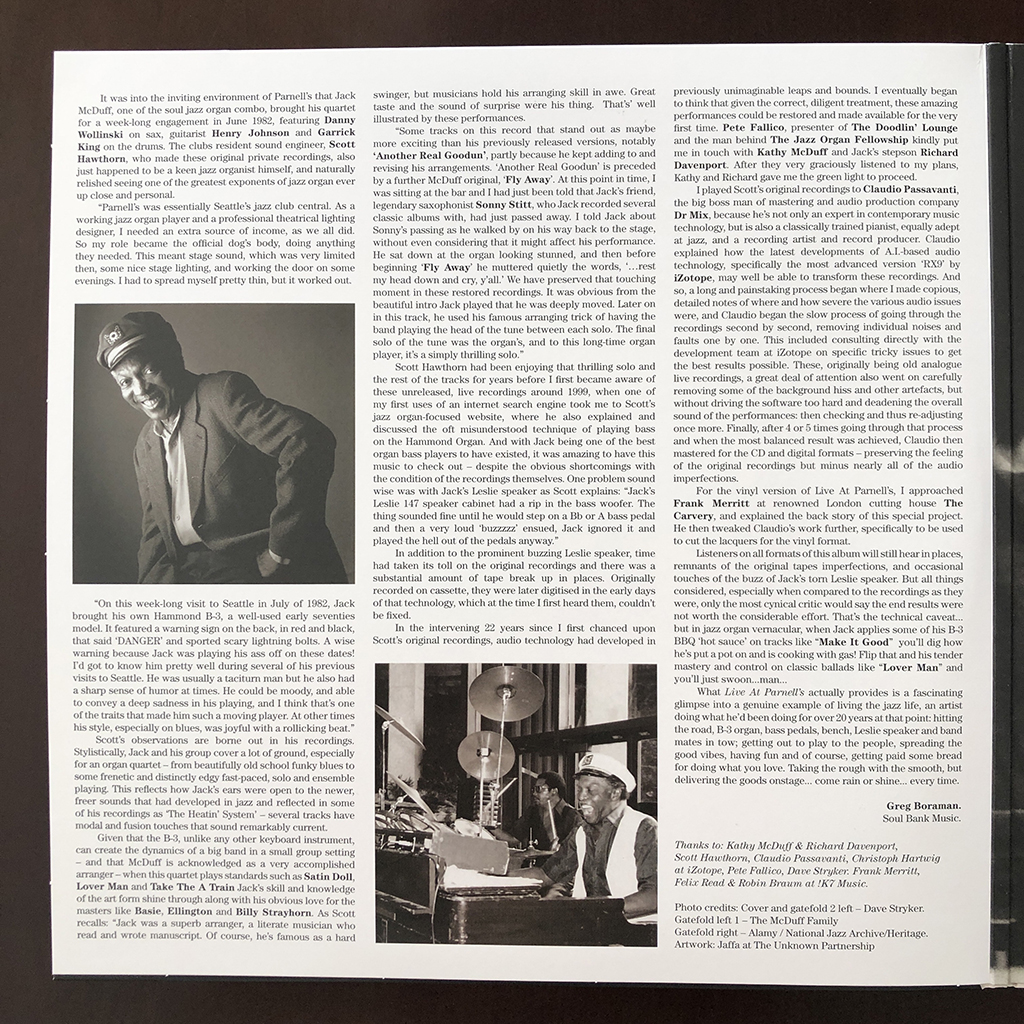 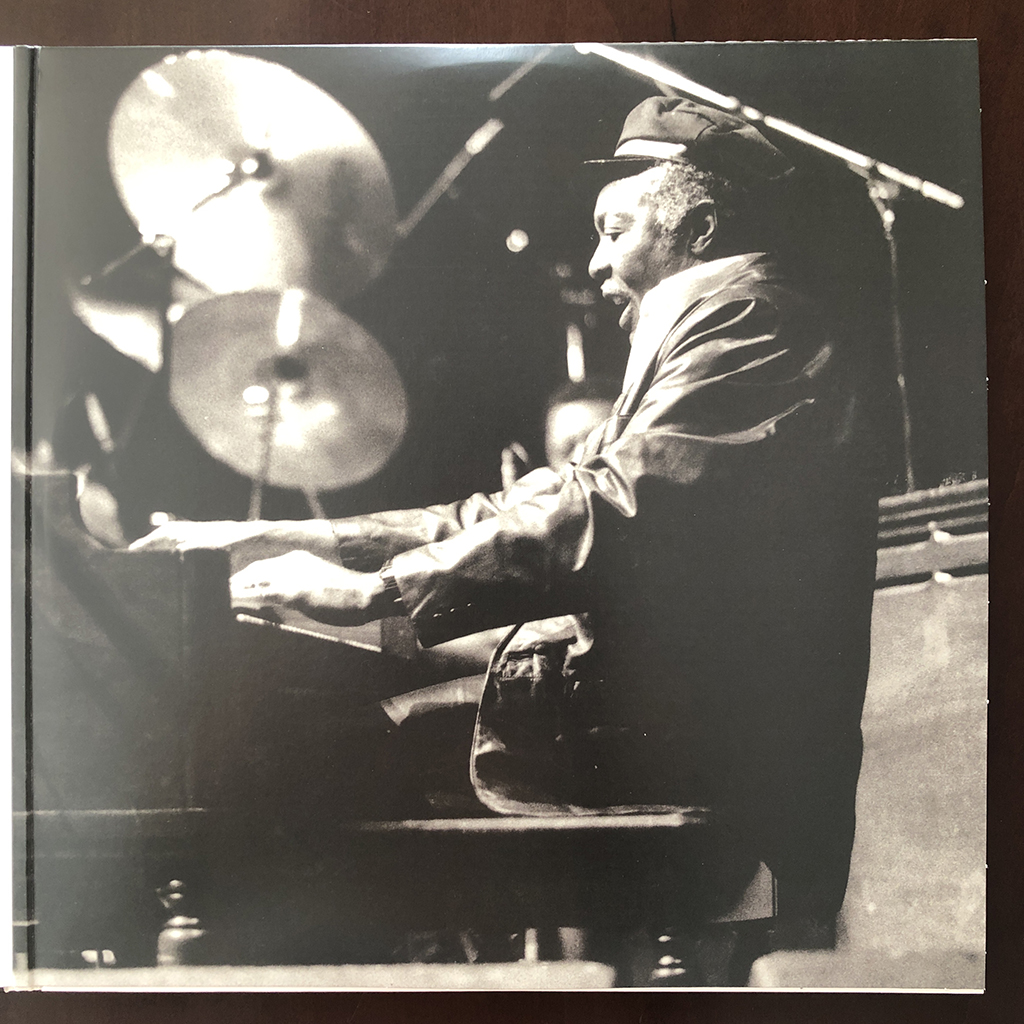 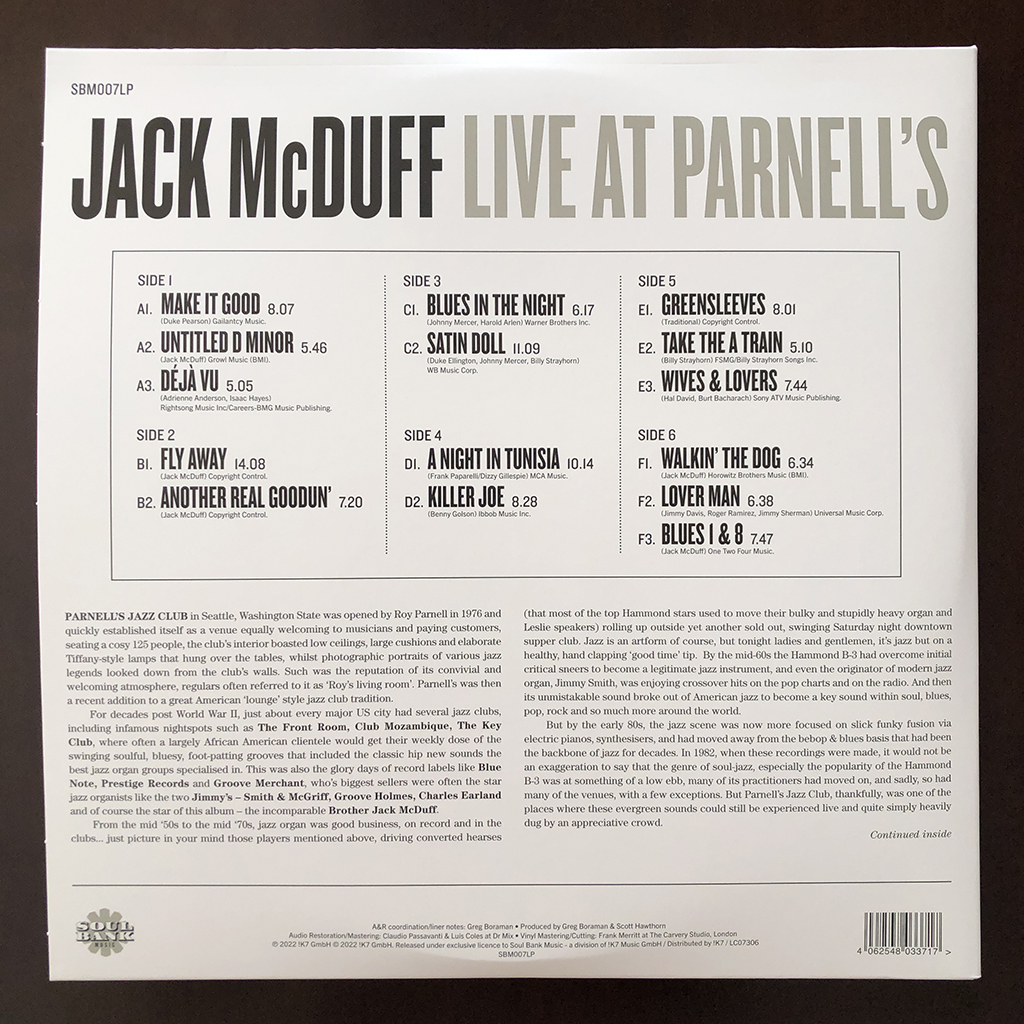 ‘Live At Parnells’ is an unreleased 1982 live album by the legendary US jazz organist ‘Brother’ Jack McDuff and the first new music by McDuff in decades. It’s made up of 15 tracks selected from a week-long engagement in June 1982, featuring Danny Wollinski on sax, guitarist Henry Johnson and Garrick King on the drums, released by Soul Bank Music.

‘Live At Parnells’ is an unreleased 1982 live album by the legendary US jazz organist ‘Brother’ Jack McDuff and the first new music by McDuff in decades. It’s made up of 15 tracks selected from a week-long engagement in June 1982, featuring Danny Wollinski on sax, guitarist Henry Johnson and Garrick King on the drums, released by Soul Bank Music.

Listen to: Live at Parnell's

Jazz organist ‘Brother’ Jack McDuff (born Eugene McDuffy in 1926 September 17, 1926 – January 23, 2001) was second only to the infamous Jimmy Smith in terms of fame and the impact he made with the King of keyboard instruments – the Hammond B-3 Organ. Self-taught on the organ, he recorded with Willis Jackson & Roland Kirk in the late ’50s and early ’60s, cutting high calibre soul-jazz dates for Prestige Records, and later Argo / Cadet. Blue Note and Verve Records. McDuff can also take the credit for launching the career of a particularly gifted young jazz guitarist when he recruited George Benson to his own quartet, which resulted in Benson’s first solo deal in the mid 1960’s.

‘Live At Parnells’ is made up of 15 tracks selected from a week-long engagement in June 1982, featuring Danny Wollinski on sax, guitarist Henry Johnson and Garrick King on the drums. Stylistically, Jack and his group cover a lot of ground, especially for an organ quartet – from beautifully old school funky, gritty blues with tracks like Walkin’ The Dog & Blues 1 & 8, jazz standards like April In Paris, and A Night In Tunisia through to some frenetic and distinctly edgy fast paced jazz fusion type numbers – Make It Good and Untitled D Minor – and this reflects how Jack’s ears were open to the newer, freer sounds that had developed in jazz and reflected in some of his recordings as ‘The Heatin’ System’ – as several tracks have modal and fusion touches that sound remarkably current. Soul Bank’s Greg Boraman explains the 23 year old back story to how this amazing release of previously unreleased music by a bona fide jazz legend came about.

“I first heard these live recordings in 1999, when I came across Scott Hawthorn’s ’s jazz organ website, where he had made available his personal recordings of Jack and his band playing at Parnell’s in Seattle in 1982. It was amazing to have this music to check out – despite the obvious shortcomings with the condition of the recordings themselves”.

Not only were they originally made on a C60 cassette which had degraded over the decades but, as Scott explains “Jacks Leslie speaker cabinet had a rip in the bass woofer. The thing sounded fine until he would step on a Bb or A bass pedal and then a very loud “buzzzzz” ensued, Jack ignored it and played the hell out of the pedals anyway”. Boraman sent the recordings to Claudio Passavanti, of mastering and audio production company Dr Mix to assess and he started the long process of restoring the audio using A.I based audio technology, namely ‘RX9’ by iZotope, and began transforming these recordings from just about listenable to commercially releasable.

Listeners will still hear in places, remnants of the original tapes imperfections, and occasional touches of the buzz of Jacks torn Leslie speaker, but all things considered, especially when compared to the recordings as they were – only the most cynical critic would say the end results were not worth the considerable effort.