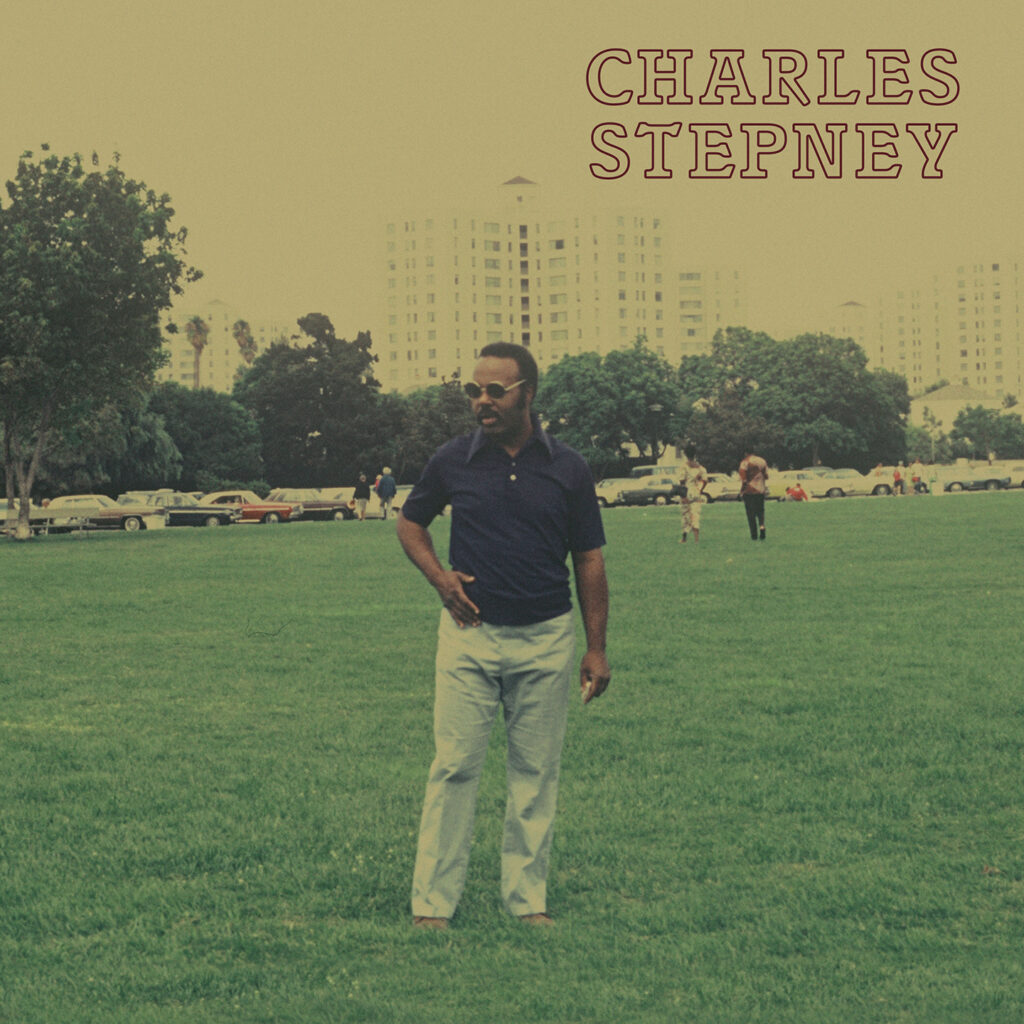 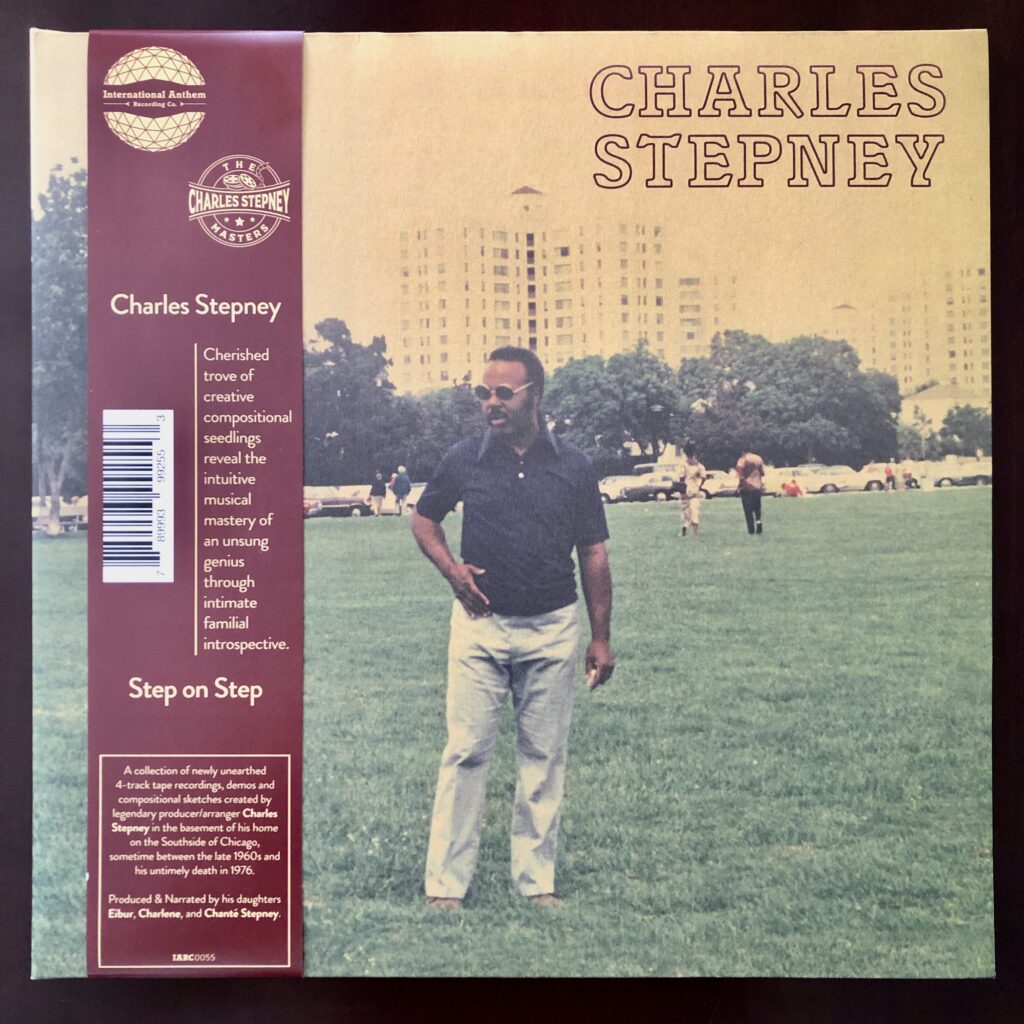 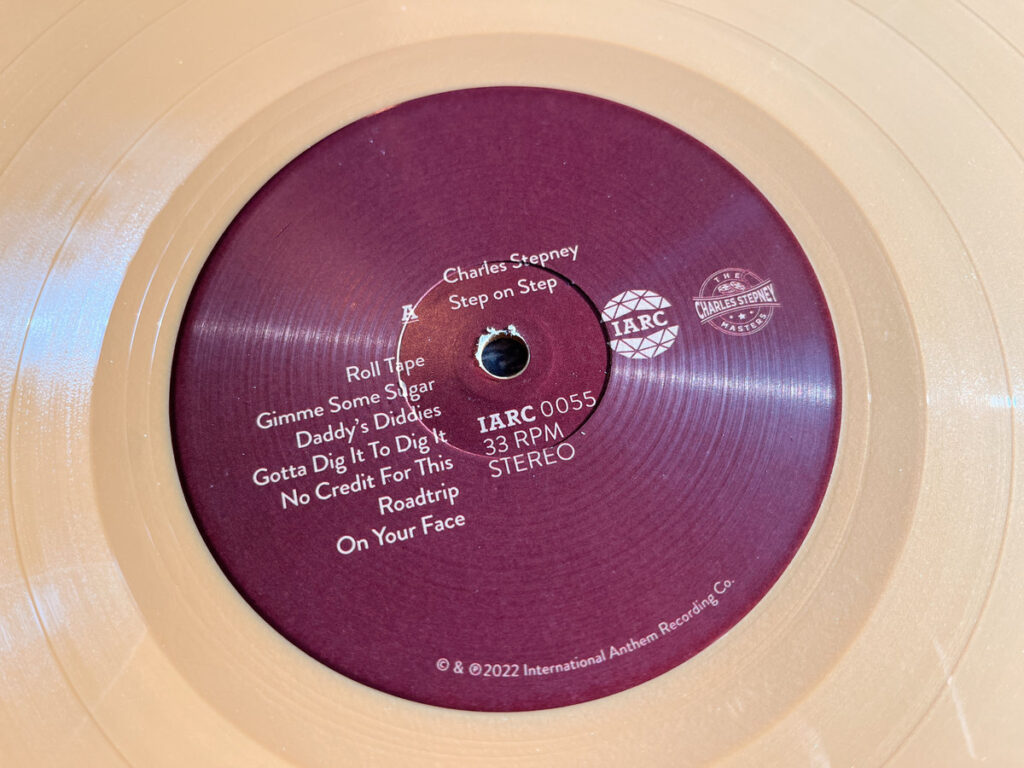 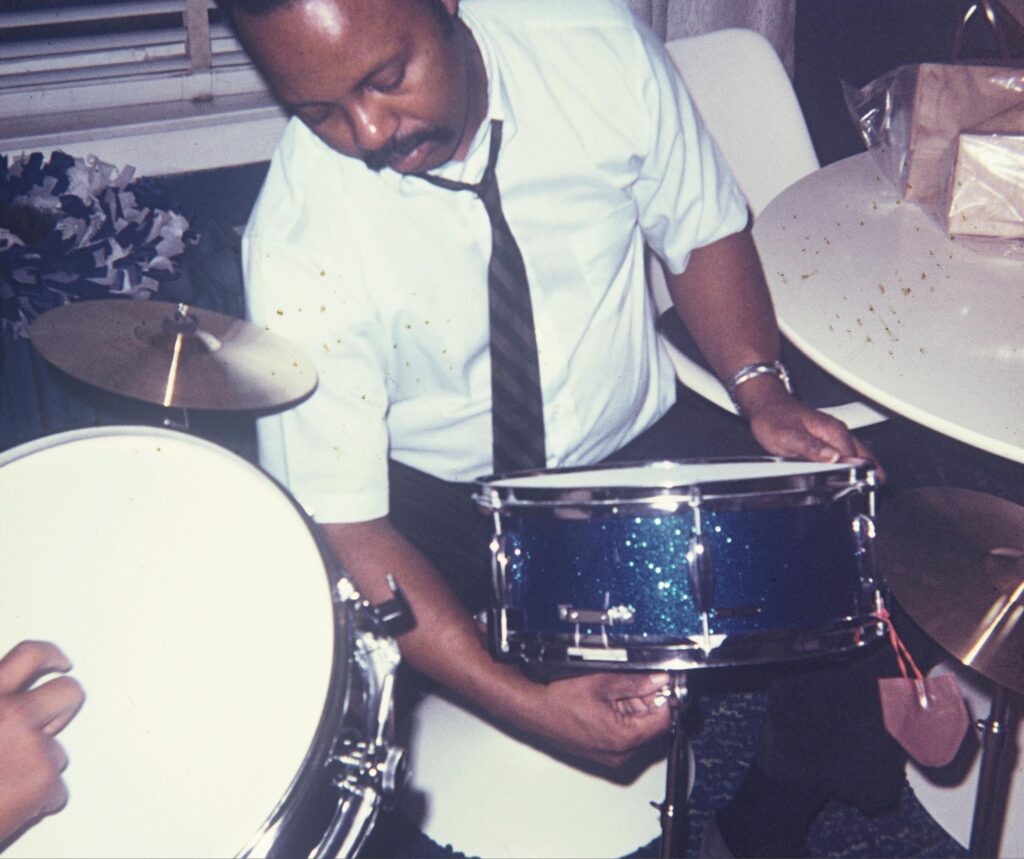 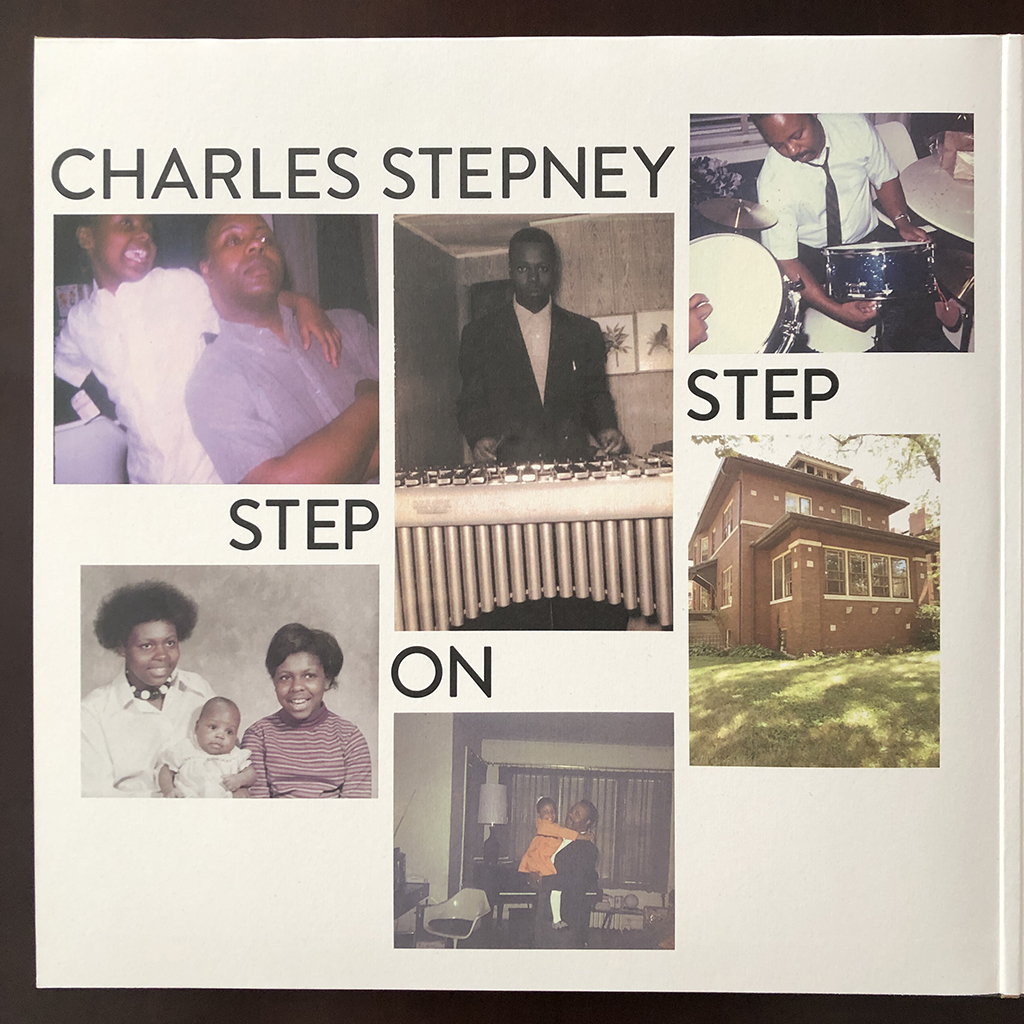 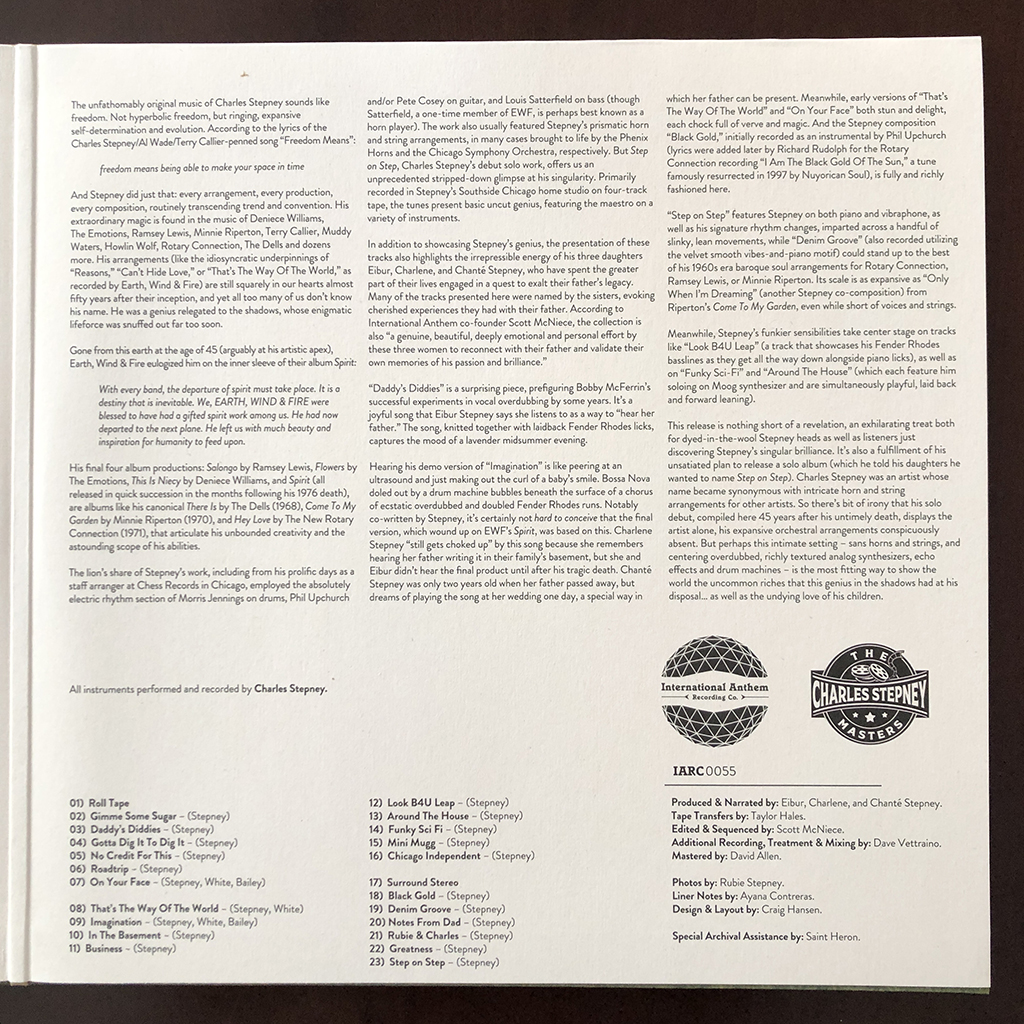 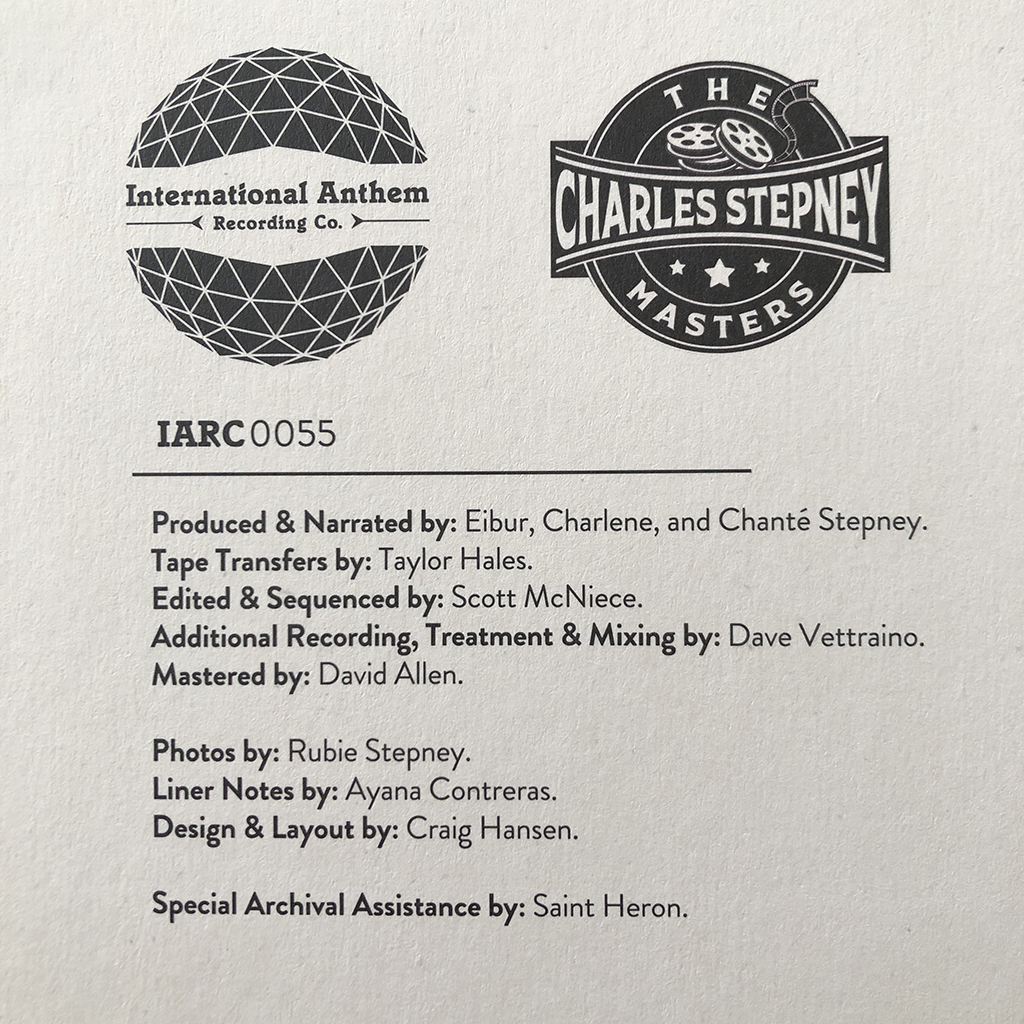 Listen to: Step on Step

The music that makes up Step on Step was created by Stepney alone, in the basement of his home on the Southside of Chicago, sometime in the late 1960s and early 1970s, before his untimely death in 1976.

A Chicago born and bred arranger, producer, multi-instrumentalist and songwriter, Stepney is known for his work with Earth, Wind & Fire, Deniece Williams, and Ramsey Lewis, and as a staff producer for Chess Records in the 1960s, where he was an essential creative force behind seminal recordings by Rotary Connection, Minnie Riperton, Marlena Shaw, Muddy Waters, Howlin Wolf, Terry Callier, The Dells, The Emotions, and many more. In the decades since his passing, the presence of his name in liner notes and on vinyl labels has become a seal of quality for record collectors, music historians, and aficionados, while his sound has been used by countless samplers in the hip-hop world including Kanye West, A Tribe Called Quest, The Fugees, MF Doom, and Madlib. But in comparison to the post-mortem renown of his sound, or the music he created and the artists he supported while he was alive, Stepney is a greatly underappreciated figure… a genius relegated to the shadows.

One of the signature elements of his “baroque soul” sound is the epic, expansive, orchestral expression of his horn and string arrangements (in many cases brought to life by members of the Chicago Symphony Orchestra), as heard on Minnie Riperton’s “Les Fleurs,” or Marlena Shaw’s “California Soul,” or Terry Callier’s “What Color Is Love.” Hence making it even more special that his de-facto debut LP Step on Step, which sees its first wide release nearly five decades after his death, is a collection of stripped-down 4-track tape recordings featuring Stepney, alone, performing all instruments with minimal means. It is, as said by Chicago culture historian (and author of Step on Step liner notes) Ayana Contreras, “the uncut funk,” an unprecedented depiction of an imbued composer imagining and conceiving music (some of which would eventually become massive studio productions) in its primal state.

Step on Step features 23 tracks, most of which are original compositions by Stepney that were never again recorded by him or any other artist. It also features prototypical, seedling-style demos of Stepney compositions for Earth, Wind & Fire, including “That’s The Way of The World,” “Imagination,” and “On Your Face,” as well as the original version of “Black Gold,” which would eventually be recorded by Rotary Connection (as “I Am The Black Gold of The Sun,” with lyrics by Richard Rudolph). And in addition to the wordless croons of Stepney original and early single “Daddy’s Diddies,” Stepney’s actual voice is heard on a couple occasions across the album, testing microphones and inputs on his tape machine.

All of the otherwise unrecorded, previously unnamed original compositions contained on Step on Step were given their titles by Stepney’s daughters Eibur, Charlene, and Chanté Stepney, whose voices are also heard throughout the album, telling stories and sharing memories about their father. The Stepney Sisters, who produced this album over many years, have long been engaged in efforts to celebrate their father’s legacy and bring his work into brighter light. They’ve cherished the tape reels left behind by their father in the basement of their home, transferring the audio on multiple occasions, and originally compiling the recordings for an ultra-limited CD on their own DIY label (The Charles Stepney Masters) in the early 2010s. “We always talk about how we were trying to develop this and would go to different people and they would go ‘what is this raw stuff…’ It was just the first level of something that became something really great,” says Chanté. “To get this type of intimate look into an artist’s process is really unknown and unheard of… so I just really appreciate the opportunity to give this. I am very happy for my Dad that we’re able to share this with the world in this way, with this amount of respect.”

This new double LP collection on International Anthem presents “a genuine, beautiful, deeply emotional and personal effort by three women to reconnect with their father and validate their own memories of his passion and brilliance,” says label co-founder Scott McNiece. And it’s a long-overdue fulfillment of Stepney’s unsatiated plan to release a solo album – which he once vowed to his daughters that he would do, and that he would name it: “Step on Step.”